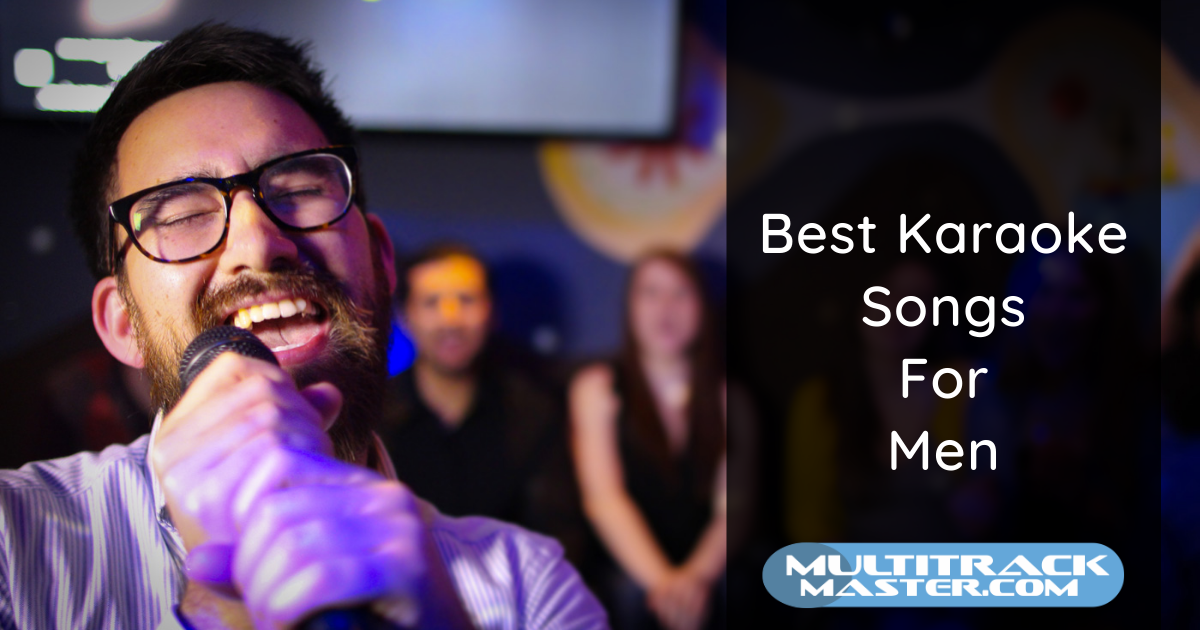 Some people might think that men wouldn’t want to sing karaoke as much as ladies like to, but they would be dead wrong. In fact, men makeup at least half of all karaoke singers out in the bars, clubs, and even at home. Karaoke is such a fun activity, everyone wants to get in on it, even if they might be a little shy about it in the beginning. Men karaoke singers enjoy that spotlight and the feeling of a couple of minutes of short-lived fame just as much as ladies.

Just like with karaoke songs for women, men also have to be careful about the song choices they pick if they want to do a great job in front of an audience or even if you’re singing at home. Also, just like with women, men have many different voices. Some have low range, some high range and some are just somewhere in between. Depending on what type of voice you have and how well you can sing, you should check out a lot of karaoke favorites that would be right up your alley!

Like many men, you could have a low to a very low voice. It’s not uncommon and many guys with that low range sing beautifully with a deep richness that not just anyone can do. It can be just as difficult to sing in a low voice as it can be to sing in a high voice. Some of the best male singing artists have those low masculine tones. Take Johnny Cash, Barry White, and Isaac Hayes just to name a few of the greats.

As with any karaoke singer, male or female, the last thing you want to do is pick a song to sing that is just not in your range. Guys with low voices might want to stay away from songs by Michael Jackson or Freddie Mercury because you know their songs will have notes you are probably not going to be able to reach unless you have an insane vocal range like they do. Check out the song list below to discover karaoke favorites that might be just right for your low key voice.

“I Love This Bar” – Toby Keith

“House Of The Rising Sun” – The Animals

“Can’t Get Enough Of Your Love Baby” – Barry White

“Can You Feel The Love Tonight” – Elton John

Being a guy with a good voice that can also send out sweet melodies in a higher pitch when needed is such a drawing card for music lovers. It can be unexpected when a man can deliver the high range of notes and people definitely pay attention. It’s not every guy that can deliver the high notes and that is sometimes what makes the great male artists great!

If you are a dude that can deliver the high notes with ease and elegance, by all means, go for it! There are plenty of songs available for karaoke that you can emulate to give your best performance and showcase your skills. Some of the greatest high pitch male singers like Freddie Mercury, Michael Jackson, Steve Perry, and Vince Gill did not get famous by being bashful!

“I Still Believe In You” – Vince Gill

“When I Was Your Man’ – Bruno Mars

“Any Way You Want It” – Journey

Just like many ladies have those incredible girl’s night out parties, guys have probably been having them a little longer! Bars and clubs are often where the party ends up and if you’re in a karaoke bar, chances are at some point during the night a couple of guy buds are going to end up singing together.

Hey, who knows, that may be how some of the best guy duets teams got started.

We can start with some fantastic male duet artists like Simon and Garfunkel and run straight into country megastars like Brooks & Dunn. Of course, you don’t necessarily have to sing a song made by a duet to turn a song into a good choice for you and a male friend. Look over the list below to come up with some good choices to sing with a good friend next time you get together for karaoke night!

“Dancing In The Street” – David Bowie and Mick Jagger

“The Girl Is Mine” – Michael Jackson and Paul McCartney

“Under Pressure” – Queen and David Bowie

“I Saw Her Standing There” – Jerry Lee Lewis and Little Richard

“Walk This Way” – Aerosmith and Run-DMC

“Beer For My Horses” – Toby Keith and Willie Nelson

Sometimes when a group of male friends gets together for a night out on the town, karaoke is one of the most fun and safest ways to sow some wild oats. If everyone is up on a stage together belting out some of their favorite tunes as a group, it can be a blast and might even end on a better note, so to speak.

A bunch of guy friends hanging out together usually don’t have a problem bonding with one another and singing karaoke is no different. Just take a look below at some of the great songs you and your guy pals can try singing together just to see how good, or sadly, how bad you can sound. Either way, you will likely have a great time trying and maybe if it’s a good sound you will remember and if not, you won’t!

“Fight For Your Right To Party” – Beastie Boys

“Born To Be Wild” – Steppenwolf

“Start Me Up” – The Rolling Stones

“With A Little Help From My Friends” – Joe Cocker

“Should I Stay Or Should I Go” – The Clash

“Livin” On A Prayer”- Bon Jovi

“The Boys Are Back In Town” – Thin Lizzy

“When A Man Loves A Woman” – Percy Sledge, Michael Bolton