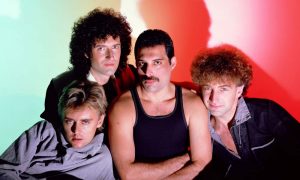 Queen, British rock band formed in London in 1970. The band became one of, if not the biggest staduim rocks band in the worl after their 77 release of the album News of the World.

The song “We Will Rock You” and “We Are The Champions” brought them to the worlds stage instead of their earlier successes in the UK. Speaking of earlier hits, “Bohemian Rhapsody” held the number one spot on the UK charts for 9 weeks in 75.

It’s estimated that the band sold up to 300 million records. The only band I know that’s close to that is AD/DC with 200 million album sales.

Queen | Somebody To Love (vocals only)

Queen | Tie Your Mother Down (drums only, bass only)

Queen | Save Me (instrumental)

Queen | Somebody To Love (background vocals only)

Queen | Keep Yourself Alive (vocal only, guitar only)

Queen | Another One Bites The Dust (multitrack)

Queen | You’re My Best Friend (vocal only, keyboards only)

Queen | I’m In Love With My Car (drums only)

Queen | Hammer To Fall (vocal and guitar only, vocal only)

Queen | The Show Must Go On (vocal only, keys only)