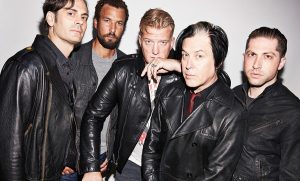 Queens of the Stone Age is a rock band that was founded in Palm Desert, California Josh Homme in 1996.

Over the last 25 years they had many lineup changes where there are now more former members than current members.

Most call them a riff oriented band, but they’ve spread across many different genres as their music evolved, probably because of lineup changes over time.

They’ve had many gold and silver records and singles over the years and have hit the Billboard 200 multiple times and fell just shy of the top 40 on more than one occasion.

The band is still a crowd pleaser to this day, making the list with a NME Award for The Best Live Band.

Queens of the Stone Age | No One Knows (drums only)