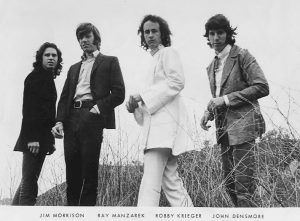 The Doors were a famous rock band. The group was created in 1965 in Los Angeles. The members of the band were Robby Krieger, John Densmore, Jim Morrison, and Ray Manzarek. The group is one of the most important rock banks of the ’60s. The band was famous for the creative lyrics that Morrison, their vocalist, wrote for their songs.

People also associated the group with the youth counterculture that was prominent during that decade. The group was extremely successful, and they released many albums in the years that followed their formation. They broke a record when they became the first band from the United States to get eight consecutive gold LPs.

On July 3, 1971, Morrison died. The three remaining members of the band kept on playing for a few years after his death. They ultimately disbanded in 1973. Manzarek died on May 20, 2013.

The Doors | L.A.Woman (vocal only)

The Doors | Break On Through (To The Other Side) (vocal only, instrumental only)