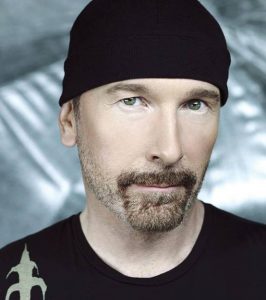 The Edge was born David Howell Evans on August 8, 1961 in England. He grew up in Ireland and became to be known as a musician and songwriter for the band U2. His career started at Mount Temple Comprehensive School by forming a band with his classmates and brother, which then became U2.

They have since recorded 14 albums with The Edge having one solo project. The Edge has garnered 22 Grammys as well as being in the Rock and Roll Hall of Fame. He has since been a philanthropist especially for human rights.