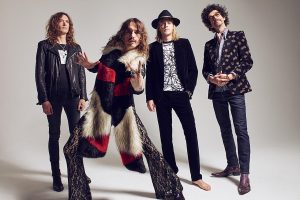 The Darkness is a British Rock Band created in the year 2000 in Lowestoft, Suffolk, UK. The band members were Justin Hawkins, Dan Hawkins, Frankie Poullain and Rufus Tiger Taylor. Justin was the lead vocal of the Band until he left in 2011 while others are backing vocals. The band became popular after releasing their debut album titled Permission to Land.

After this, they released some couple of albums including One Way ticket to hell… and back, hot cakes, last of our kind, pine wood smile and their latest album Easter Is Cancelled which released on October 2019. They won so many award and recognition. After Justin’s departure in 2005 due to rehab from substance abuse, the other members formed a new band called Stone Gods where they continued performing, recording and making waves all around the world.

The Darkness | I Believe In A Thing Called Love (vocal only)