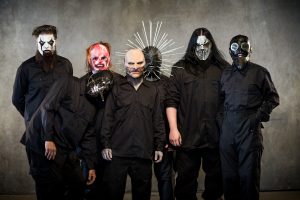 Slipknot is a metal band from Des Moines, Iowa. The band is known for high energy stage shows featuring pyrotechnics and lots of chaos. The band started in 1995 with three original members, Shawn Crahan, Joey Jordison and Paul Gray.

Of the original trio, only Crahan is still in the band lineup. The current line up is Shawn Crahan, Craig Jones, Mick Thomson, Corey Taylor, Sid Wilson, Jim Root, Alessandro Venturella and Jay Weinberg. The band is currently touring to support the release of the album, We Are Not Your Kind, which was released on August 9, 2019. It is expected to release a new album titled Look Outside Your Window sometime in 2020.

Slipknot | Wait And Bleed (vocal only and instrumental)

Slipknot | Before I Forget (guitars only)

Slipknot | Psychosocial (guitar only, drums only)