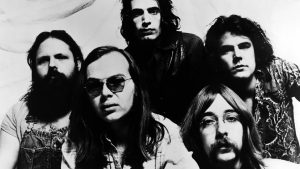 Steely Dan is a rock music band from New York, USA formed in 1972 by Donald Fagen and Walter Becker. Their style mixed rock, jazz, latin, reggae, pop, R&B, and blues combined with often unconventional lyrics for a diverse and unique sound that brought them success through the 1970s up until 1981. Fagen played keyboards and contributed lead vocals. Becker played guitars, bass, and contributed backing vocals.

Notably their material was actually recorded using large numbers of session musicians – to the degree they retired live performances in 1974 and became a studio-only group up until 1981 when the group disbanded. In 1993 Fagen and Becker reformed the group, toured regularly, and eventually released two new albums in 2000 and 2003.

Steely Dan | Bodhisattva (guitars only, drums and bass only)