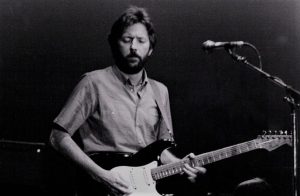 Eric Clapton is one of the most famous English rock and blues guitarists, singers, and songwriters of the 20th century. He began his career in 1963 when he joined a band called the Yardbirds. He bounced around from one band to another, from The Yardbirds and the Bluesbreakers to Cream, Blind Faith, Delaney and Bonnie and Friends, and Derek and the Dominos before finally starting his solo career in the 1970’s. His first album was titled with his own name and was released on August 16th, 1970.

It wasn’t until his fifth album that he recorded his cover of a song that’s one of his most well known to date, “Cocaine”.

Over the course of his career, he’s produced 23 solo studio albums and 2 collaborative albums.

Cream | Sunshine Of Your Love (Eric Clapton guitar only)