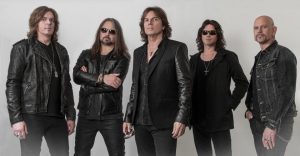 Europe is a heavy metal rock band formed in 1979 in Upplands Väsby, Sweden. They were formed by John Norum, Peter Olsson, Tony Reno, and Joey Tempest. When the group won the very first “Rock-SM“ (the Swedish Rock Championships), they became an immediate success. It gained them a record deal with Hot Records, who they released their first album with a year later in 1983.

It wasn’t until their third album The Final Countdown was released in 1986 that they became an international hit. The song the album takes its name from remains an iconic piece from 1980’s and has sold over 15 million copies worldwide between the album and the single.