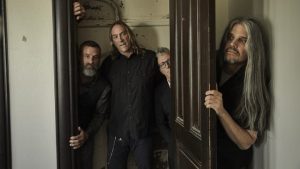 Tool is an American rock band that was formed in 1990 by Paul D’Amour, Danny Carey, Maynard James Keenan, and Adam Jones in Los Angeles, California.

They started out playing in the Los Angeles area and was signed to Zoo Entertainment for their first EP released in 1992 called Opiate. The EP was a success and the band started touring with bands such as Rage Against The Machine, Rollins Band, White Zombie, and others.

Their first real full length album was released in 1993 and was called Undertow.