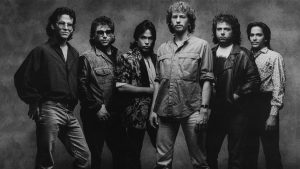 Toto was an American rock band put together by Steve Lukather, Steve Porcaro, Jeff Porcaro, and David Paich in 1977. The band was said to have been named after the dog Toto from the movie The Wizard of Oz. But upon having to actually choose a name for the band, they discovered that the word “toto” in Latin means “total” or “all-encompassing”. Because the group played in many different genres and because the members had played on so many other records, they chose “Toto” is their name.

Their first album used the same name and their first hit single “Hold the Line” is what gained them success initially, as it attained #5 on the Billboard Hot 100 chart in 1978. It managed to get to #14 in the UK charts.

But, their most famous song has to be “Africa” from their 1982 album Toto IV. The album went triple platinum in the United States and in Canada, while it went double platinum in Australia, and single platinum in France, Germany, Japan, and the Netherlands.