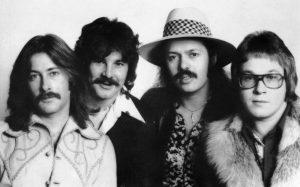 The Guess Who was a rock band, popular in the late ’60s and early ’70s. They were formed in Winnipeg, Canada in 1965 as a garage band named Allan and the Silvertones. Through a few band name changes, they settled on The Guess Who after their record label at the time credited the single cover of “Shakin’ All Over” to “Guess Who” to build mystery around the band.

Famous for the song “American Woman”, also covered by multiple artists like Lenny Kravitz used in the movie Austin Powers, the were placed into the Canadian music hall of fame in 1987. Their influences included pop rock and psychedelic rock influences. Past members include Randy Bachman (Bachman Turner Overdrive). Other famous songs include These Eyes and Laughing. Through multiple member changes, and reunions, the band is still active to this day, however most of the original members are no longer active.

The Guess Who | American Woman (bass only)