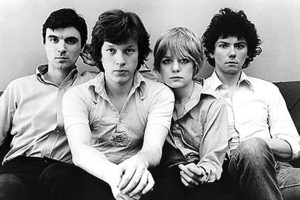 Talking Heads were a famous rock band at the forefront of the New Wave movement, founded in 1975 and fronted by David Byrne. They are largely known for their unique incorporation of several musical influences ranging from world music to funk, as well as for Byrne’s distinct, anxious vocals.

Talking Heads most enduring and iconic hit song to this day is “Once in a Lifetime” from their album Remain in Light. Other notable hits in the band’s career include “Burning Down the House” and “Psycho Killer.” After releasing 8 studio albums, Talking Heads disbanded in 1991. They were later inducted into the Rock and Roll Hall of Fame in 2002.

Talking Heads | Once In A Lifetime (synth loop and vocal chorus)