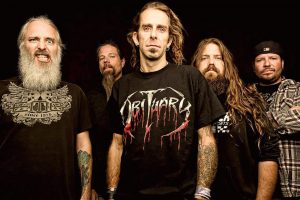 Lamb of God is a heavy metal bad that hails from Richmond, Virginia. They were formed in 94 under a different name but finally settled on Lamb of God.

They’ve had 9 studio albums since their founding and cranked off and 94, but are still rocking crowds to this day.

They’ve sold right at 2 Million in the US, including one Gold Album. They’ve played with Metallica and Slayer in the past.