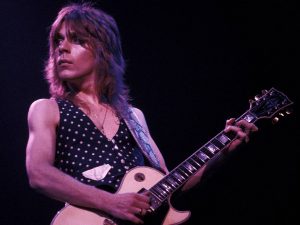 Randy Rhoads was born on the 6th of December, 1956. He was a heavy metal guitarists that changed the the music world forever in his short time in the spotlight.

He played with only two bands, Quiet Riot and Ozzy, but his guitar skills made for a few very memorable songs that are still played on radio to this day across the US.

The number of guitarists today that credit him as a major influence is simply too long to list. Unfortunately, his time on earth ended long before his time due to an plane crash on the 2nd or March, in 1982 while on tour with Ozzy.