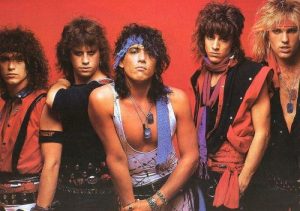 Ratt, which was founded we know not what year. We do know that the roots of Ratt was by Stephen Pearcy. We’re just not sure of the timelines and accuracy of their early history.

The whole story is so convoluted that even Wikipedia has issues with Ratt’s current page and the information contained within it for multiple reasons.

So here’s what we do know is important.

Ratt’s name was shortened from Mickey Ratt to just Ratt to make it more brandable in 1981. But it wasn’t until 1984 that big hair bands took off, including Ratt.

Out of the Cellar was their first album that hit commercial success, becoming one of the few bands that were considered the catalyst for glam rocks advent to the top of the charts.

“Round and Round” was a huge hit for the band, making it to the number 12 spot on the Billboard Hot 100. The band continues to rock crowds to this day, with a few lineup adjustments and breaks throughout the years.

Ratt | Round And Round (guitar only)