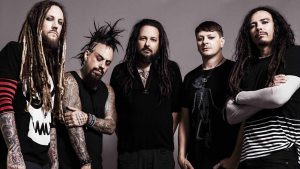 Korn (KoЯn) is a Metal band that hails from Bakersfield California. The band was founded in 1993.

Neidermayer’s Mind was released as a demo tape in 1993 spread to record companies. They even gave it away free to anyone who requested a copy.

It was a start, but it wasn’t until the release of “Follow the Leader” in 1998. From there forward, each subsequent release was more and or less successful, but still topping charts.

They are still making music and performing for crowds to this day.

Korn | Freak On A Leash (bass and drums only)

Korn | Falling Away From Me (vocals only)