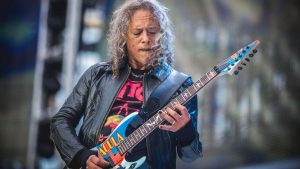 Kirk Hammett – Kirk Lee Hammett was born the 18th of November, 1962. He took the helm of lead guitarists and contributing songwriter to the Band Metallica in 1983, one of the most popular bands in the US and around the world for their hard, distorted, speedy riffs and rhythms.

Prior to joining the ranks of Metallica, Kirk founded the band Exodus. He’s remains with Metallica as of early spring of 2020.

with Death Angel
Kill as One (Demo) (Producer)

Metallica | Ride The Lightning (vocal/drums only, guitars only)

Metallica | For Whom The Bell Tolls (multitrack)