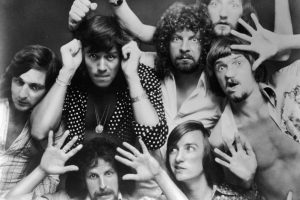 Electric Light Orchestra, also known as ELO, was formed in 1970 in Birmingham, England by Jeff Lynn, Roy Wood, and Bev Bevan. Roy Wood was a member of the British rock band The Move at the time and was the one who had the idea for a band that would fuse classical and rock music together. The orchestral instruments such as the violin, horns, cellos, etc were the focus instead of the guitars.

Wood wanted to pursue Electric Light Orchestra and intended to dissolve The Move after its third album, Looking On, but more money was needed to support his new band, so The Move did one last album in 1971 called Message From The Country.

The band’s first album was titled with their name, The Electric Light Orchestra, was released on December 3rd, 1971 in the UK and in March 1972 in the United States as No Answer. The title of the US album was the result of a misunderstanding between a United Artists Records executive trying to get in touch with someone on what the album name was. He wrote “no answer” on his notes about the attempt at contact and so the album was released with that as the name.

Can’t Get It Out Of My Head (instrumental)