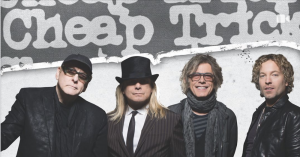 Cheap Trick was formed in 1973 by Robin Zander, Tom Petersson, Bun E. Carlos, and Rick Nielsen. The original lead singer was Randy “Xeno” Hogan, but left not too long after the band was formed and Robin Zander replaced him. Their first demo was recorded in 1975 and in 1976 they signed a deal with Epic Records. Their first album called Cheap Trick wasn’t a commercial success and nothing on the album made the charts at the time.

Oddly enough, it wasn’t until their tour in Japan that the band started to become popular. They released their live album Cheap Trick at Budokan and it ended up becoming so in demand that Epic Records released it in the United States in 1979. It was that album that turned the band into an international hit.