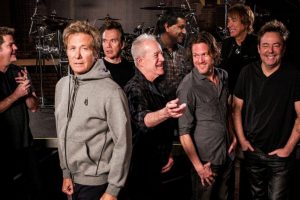 Chicago was formed in, of all places, Chicago, Illinois and the group originally called themselves “The Big Thing”.

The band started as a group of 6 people, Walter Parazaider, Terry Kath, Dammy Seraphine, James Pankow, Lee Loughnane, and Robert Lamm. They began their career as a cover band called “The Big Thing”, but started working on original songs and transitioned to calling themselves Chicago Transit Authority in 1968 when they signed with Columbia Records. Because of their performances at the Whisky a Go Go club in West Hollywood, they ended up becoming an open act for Janis Joplin and Jimi Hendrix.

Their first record, Chicago Transit Authority, was a double album and ended up making it to #17 in the Billboard 200 album charts. It was this album that caused the group to be nominated for a Grammy Award in 1969 for Best New Artist of the Year.