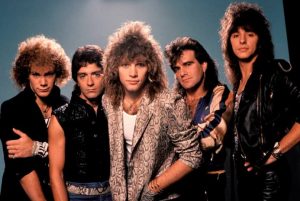 Bon Jovi was originally formed in Sayreville, New Jersey by the lead singer Jon Bongiovi, bassist Hugh McDonald, drummer David Bryan, drummer Tico Torres, and guitarist Phil X. Jon Bon Jovi started playing live music when he was 13 years old in a band called Raze. It wasn’t until 16 that he met David Bryan and together, they founded their band Atlantic City Expressway. From there, they changed the name to John Bongiovi and the Wild Ones. He recorded “Runaway” in 1980 in his cousin’s recording studio alongside studio musicians. It was re-recorded in 1982 and played on the radio station WAPP and gained traction there. It was then shared with sister stations in other cities. As this happened, Jon started seeking out other talent for the band, including Dave Sabo who went on to form the band Skid Row and David Bryan, who recruited Tico Torres and Alec John Such. Hugh McDonald was a local studio musician that played bass in the 1982 re-recording of “Runaway”.

You Give Love A Bad Name (guitar only) – Bon Jovi