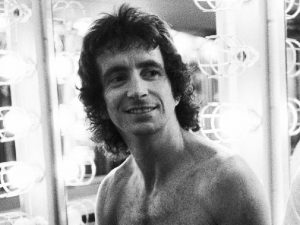 Bon Scott was the lead singer of AC/DC from 1974 to 1980 when he died from acute alcohol poisoning. The lead singer before him was Dave Evans and he officially replaced him on October 24th, 1974 due to Evans having personal issues with the band and management. He had his start in music with a his first band called The Spektors as primarily a drummer, but sometimes sang as the lead. In 1967, the band combined with another band known as the Winstons and together they created The Valentines. Vince Lovegrove was co-lead singer with him, but unfortunately they disbanded in 1970 due to largely a drug scandal, but also artistic differences.

In 1970, Bon Scott moved to Adelaide and joined with a band called Fraternity. When the band went on hiatus in 1973, Scott took a day job at a fertiliser plant and joined a group known as the Mount Lofty Rangers. After a motorcycle accident in May of 1974, Scott suffered serious injuries and Vince Lovegrove, his old bandmate from The Valentines, gave him work to do and introduced him to AC/DC not long afterward.

Let There Be Rock (vocal rhythm guitar only) – AC/DC