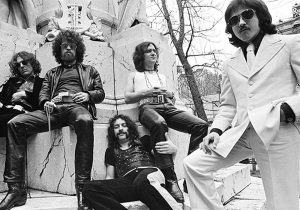 Blue Oyster Cult has its origins in Stony Brook, New York in the United States and was formed in 1967 under their original name of Soft White Underbelly. The band’s name would change multiple times from that to Oaxaca, the Stalk-Forest Group, among other temporary names. They finally chose Blue Oyster Cult in 1971, as a result from a poem written in the 1960’s by their manager, Sandy Pearlman.