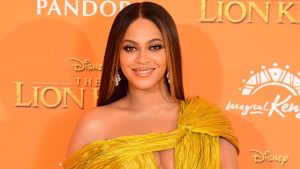 Beyoncé was born as Beyoncé Giselle Knowles and began her music career as an a child in a group called Girl’s Tyme. The name of the group was changed to Destiny’s Child in 1996 and their first label debut song, “Killing Time”, was on the sound track to the hit movie Men in Black. But it wasn’t until their first big hit single “No, No, No” was released in 1998 on their self-titled debut album, Destiny’s Child. By 2001, the group had essentially disbanded to pursue solo careers.

In June 2003, Beyoncé released her first solo album, Dangerously in Love. The first week of its release, it sold 317,000 copies.

The group name for Destiny’s Child came from a passage in the Book of Isaiah in the Bible.

End of Times (vocals only) – Beyoncé