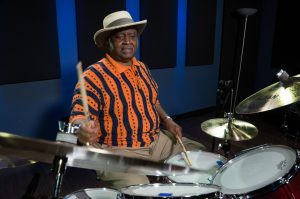 Bernard Purdie is the most recorded drummer of all time with a very extensive discography that spans far beyond his own gigs as a lead artist.

He began his career doing sessions with Mickey and Sylvia in New York City and he was eventually contracted to play with James Brown.

He also worked with multiple other big name acts such as Aretha Franklin, B.B. King, Hall & Oats, Steely Dan, and more throughout his career that continues on today.

Bernard Purdie’s discography as sideman extends far beyond this and includes too much to list here.