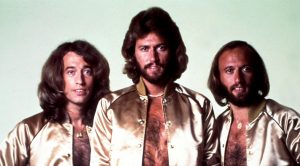 The Bee Gees were formed in 1958 in Brisbane, Queensland, Australia by the Barry, Robin, and Maurice Gibb and the band name was originally chosen as a combination of radio presenter Bill Gates’, Bill Goode, and Barry Gibb’s initials. The band wrote all of their own music and wrote and produced major releases from other artists, including “Grease” by Frankie Valli.