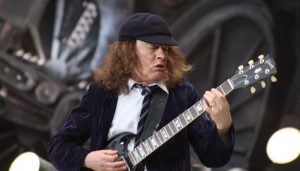 Angus Young is the lead guitarist and co-founder of AC/DC, an internationally famous rock band from Australia. He is the last remaining member of AC/DC that has been with the band since the beginning.

Let There Be Rock (Bon Scott vocal, rhythm guitar only, drums only) – AC/DC