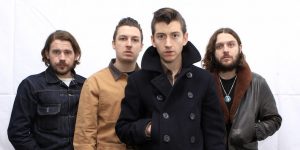 The Arctic Monkeys originated in Sheffield, England in 2002 and got their start burning off their demo collection to CDs, Beneath the Boardwalk, at their performances. The files on the discs were shared on file-sharing networks of the time and their popularity spread quickly.

Their MySpace page was originally created by their fans, as they didn’t know what MySpace was.