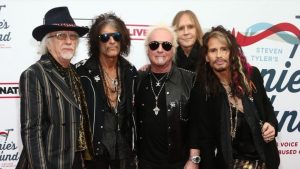 Aerosmith is one of the best known rock and roll bands of all time with a discography spanning 50 years.

Formed in 1970 in Boston, Massachusetts, the band has been a household name for decades and their music has penetrated nearly all aspects of American pop culture, from TV to movies and even video games such as Guitar Hero.

The band was originally criticized as a knockoff of the Rolling Stones because Mick Jagger and Steven Tyler were so similar in appearance.

Their album, Permanent Vacation, was the first album the group ever did while sober, according to Steven Tyler in his autobiography.

Walk This Way – Guitars Only – Aerosmith

Back In The Saddle – Vocals Only – Aerosmith