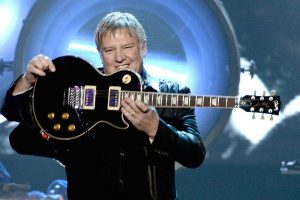 Alex Lifeson was born in Canada as Alexandar Živojinović and has been famous for being the lead guitarist of the rock band Rush since 1968.

Rush initially began as Lifeson and his neighbor, John Rutsey, experimenting with a rented drum kit. The band that they created from those experiments, The Projection, turned into Rush in 1968.

Alex Lifeson made multiple appearances in the Trailer Park Boys movies and the TV show of the same name.