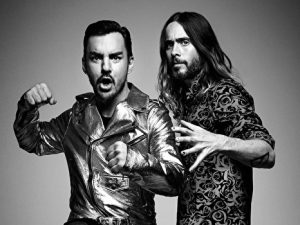 Thirty Seconds to Mars is a two man band that is made up of two brothers. Jared Leto, who handles lead vocals, guitar, bass, keyboards) and his brother, Shannon Leto (drums, percussion).

While they’ve had several others play with them in the past, they seem to like it as a two man show. These two siblings what sold over 15 million albums across the globe.

With strong vocals and extraordinary musical talent as a whole, they are still solid in alternative rock, even though their latest release in 2018 had critics divided.

History of Albums Released By Thirty Seconds to Mars:

We have tracks for you.

30 Seconds To Mars – Kings and Queens (Vocal Only)

30 Seconds To Mars – The Kill (Bury Me) (Instrumental)