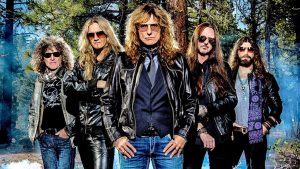 Whitesnake is a British hard rock band that had the majority of its success in the 1980’s, but remains a staple of classic hard rock to this day. They were formed by David Coverdale with Bernie Marsden, Micky Moody, Neil Murray, and David “Duck” Dowle in England in 1978.

The band’s first album, Trouble, was released in 1978 through EMI International in the UK. It wasn’t until they recorded Slide It In in 1984 that the band managed to break into the US Top 40.

Their seventh album was named after their band name. It was the band’s most successful release in the United States and was rated 8x platinum by the RIAA.

Some of the group’s biggest hits include “Here I Go Again”, “Is This Love”, and “Still of the Night”.