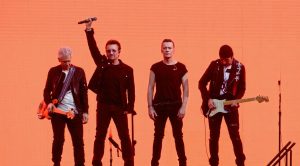 U2 is an Irish rock band that was formed in Dublin, Ireland by Bono, the Edge, Adam Clayton, and Larry Mullen Jr. in 1976.

The group knew each other from school, but weren’t very musically talented in the beginning. They started out playing under the name “Feedback” at St. Fintan’s High School in 1977. By spring of the next year, they had changed their name to U2 because out of all the names that they had come up with until that point, it was the one that they disliked the least.

Near the same time, they won a contest for £500 and studio recording time. The demo that was recorded was heard by CBS Ireland. It didn’t go well and they didn’t produce their debut album until 1980 called Boy.

Today, their most popular song remains “With or Without You”, which was on their fifth album, The Joshua Tree.

U2 | Every Breaking Wave (vocal only from live version)