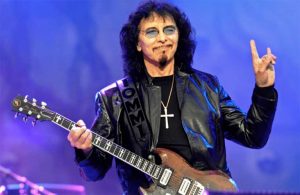 Tony Iommi, born Anthony Frank Iommi, is most famous for his role as the lead guitarist of Black Sabbath.

He was born in Birmingham, England and went to the same school as Ozzy Osbourne, even though he was one year ahead of his fellow future superstar.

Following an accident when he was at work in a sheet metal factory, he lost the tips of his middle and ring fingers on his right hand. He was told that he would never be able to play the guitar again and fully believed it.

It took listening to a recording of Django Reinhardt playing the guitar to get him to change his mind, as Reinhardt only had 2 fingers to play with on his fredboard due to a fire accident. As soon as Iommi heard it, he was inspired to attempt to play the guitar again.

It was painful to attempt to play the guitar again and eventually Iommi made his own prosthetic fingertips to help.

Black Sabbath | Children Of The Grave (Tony Iommi guitar only)