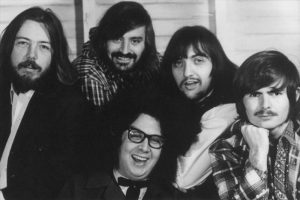 The Turtles are a 55 year old rock band that was formed by Howard Kaylan and Mark Volman in 1964 in Westchester, Los Angeles, California with some friends from high school.

At the time the band’s name was The Crossfires, but they renamed themselves The Tyrtles. The misspelling was inspired by other bands with misspelled names at the time, including The Beatles. The odd spelling didn’t endure for long, however, and they ditched it for the correct one.

“It Ain’t Me Babe” was the title of their debut album and the song that was the album’s namesake was originally performed by Bob Dylan. The Turtles performance of the song is what brought them their initial success.

The band produced 8 albums over the course of its existence and even though the band technically broke up in 1970, Howard Kaylan and Mark Volman, began performing live shows as The Turtles Featuring Flo & Eddie back in 2010.

The Turtles | Happy Together (vocals only)