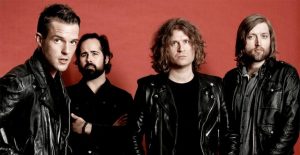 The Killers are an American rock band that was founded in 2001 by Brandon Flowers and Dave Keuning in Las Vegas, Nevada.

They are currently one of the most popular rock bands of the past 2 decades and have been nominated for a total of 38 many awards between the Grammy Awards (7), BRIT Awards (7), and NME Awards (24).

Their most popular hit single, “Mr. Brightside”, holds the record for the longest time spent on the UK Singles Chart. It held it for a straight 221 weeks. The next song below it in the rankings is “Chasing Cars” by Snow Patrol with only 166 weeks in the top 100.

The Killers | Spaceman (vocal only)