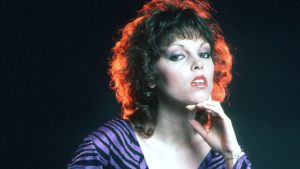 Patricia Mae Giraldo, bette known by her stage name of Pat Benatar is an American singer, songwriter and actress.

She has 15 top 40 singles, 4 Grammy Awards, 2 Platinum records and too many more to list here in a multitrack artists page.

She was a big hit in the early 80s in the rock and roll scene and because very popular in that decade.