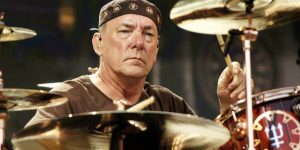 He was a Canadian musician and writer best known as the drummer and primary lyricist of the rock band Rush. Peart received numerous awards for his musical performances, including an induction into the Modern Drummer Readers Poll Hall of Fame in 1983, making him the youngest person ever so honoured.

His drumming was renowned for its technical proficiency and his live performances for their exacting nature and stamina.

Peart was born in Hamilton, Ontario, and grew up in Port Dalhousie (now part of St. Catharines). During adolescence, he floated between regional bands in pursuit of a career as a full-time drummer.

After a discouraging stint in England to concentrate on his music, Peart returned home, where he joined Rush, a Toronto band, in mid-1974, six years after its formation.

They released nineteen studio albums, with ten exceeding a million copies sold in the United States. Billboard ranks the band third for the “most consecutive gold or platinum albums by a rock band”