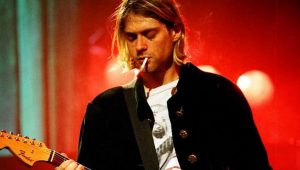 Kurt Cobain was born on the 20th of February in 1967. He was an American singer-songwriter and musician. He was also one of the 3 founders of the rock band Nirvana, where he was the front man and guitarist.

In 91, “Smells Like Teen Spirit” hit the charts and skyrocketed the band to fame.

Sadly, Nirvana never really had a chance to grow and dominate much longer due to the untimely death of Kurt Cobain.

Kurt was eventually inducted into the Rock and Roll Hall of Fame posthumously with his fellow band members Krist Novoselic and Dave Grohl, who later founded the Foo Fighters.

Nirvana | Drain You (vocal only, instrumental)