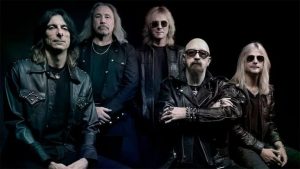 Judas Priest is a heavy metal band that was formed in 1969, but didn’t see larger record sales until the late 70’s, and an even more dynamic jump in the early ’80s.

The band has been plagued with turnover in the band throughout it’s history, and with all of the changes, it’s amazing they are still active as of 2020.

The band has sold a very respectable 50 plus million copies of their albums. They were a big part of the influence of glam metal in the early days.

They have a pretty sizable list of accomplishments as seen below.