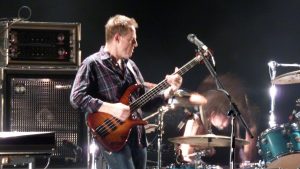 John Paul Jones was born John Richard Baldwin. He was born on January 3rd, 1946. He’s an English musician was the keyboardists and Bass player for the rock band Led Zeppelin.

He was also a co-founder of that band.

He’s done numerous other jobs. He’s been a record producer, singer -songwriter, arranger, film composer, successful solo career, and actor. He started out in the music business in 1961 and is active to this day.

Take a look at his history below. This man works at what he loves.

with Diamanda Galas
The Sporting Life (1994)

Led Zeppelin | What Is And What Should Never Be (drums only, bass only)