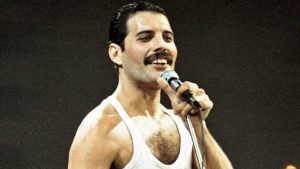 Freddie Mercury was a British songwriter, record producer, and the lead singer of the rock band Queen from its formation in 1970 until his death in 1991. He was born in Stone Town, Zanzibar in 1946 and was raised in India. He attended St. Peter’s School in Panchgani, formed a band while he was in school known as the Hectics. He was able to replay nearly anything that he heard on the radio. Although his birth name was Farrokh Bulsara, he began calling himself Freddie at St. Peter’s School. Within a year of returning to to live with his parents again, they emigrated from Zanzibar to England to escape the rebellion against the sultanate there.

He graduated Ealing Art College in 1969 and used the graphic art and design skills he learned there to design the heraldic coat of arms for Queen.

In 1970, he joined together with Brian May and Roger Taylor to create the band Smile, which would become Queen after John Deacon joined in 1971. Their first album together was released in 1973 by EMI Records in the UK and by Elektra Records in the United States.

Queen | Keep Yourself Alive (vocal only, guitar only)

Queen | Another One Bites The Dust (multitrack)

Queen | You’re My Best Friend (vocal only, keyboards only)

Queen | The Show Must Go On (vocal only, keys only)