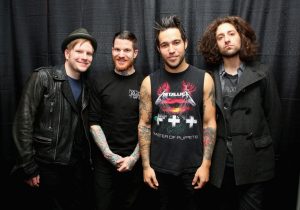 Fall Out Boy is an American rock band that was formed in 2001 by Patrick Stump, Joe Trohman, Pete Wentz, and Andy Hurley in Wilmette, Illinois. They were a product from Chicago’s hardcore punk rock culture. Wentz and Trohman were the original two members and went through a few drummers before Hurley joined them for their first album, Take This To Your Grave, which was released in 2003.

Their first huge commercial success wouldn’t come until the album From Under The Cork Tree in 2005, which is where the hit singles “Sugar, I’m Goin’ Down” and “Dance, Dance” originated. It launched the band into stardom overnight with it reaching #8 on the US Billboard Hot 100, while “Dance, Dance” reached #9.