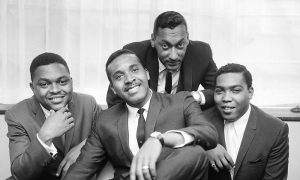 The Four Tops are a vocal quartet formed together in 1953 by Levi Stubbs, Abdul “Duke” Fakir, Renaldo “Obie” Benson, and Lawrence Payton. They formed an entire 40 years together without a single change in the group’s line-up until Payton died of liver cancer on June 20th, 1997. The four were responsible for helping form the sound of Motown in the 1960’s and performed everything from R&B, doo-wop, jazz, show tunes, and even disco. The group often sang backup vocals for popular singles by bands such as the Supremes, and Martha and the Vandellas.

The group performs to this day, but with only 1 of the original group’s members, Abdul “Duke” Fakir.

Four Tops | Reach Out (I’ll Be There) (vocal only)