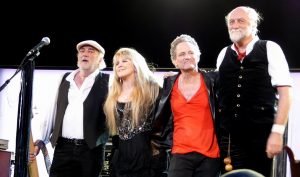 Fleetwood Mac is a rock band that was formed in London by Peter Green, Mick Fleetwood, and Jeremy Spencer. John McVie joined the band shortly before their first album was released in 1968 and Christine Perfect, a session keyboardist on the band’s second album, married McVie and joined the band full time in 1970. Danny Kirwan joined the band in 1968 as the third guitarist.

While their first album, Fleetwood Mac, was a hit that brought them success when it was released in 1968, it didn’t have a hit single on it. It charted at #4 in the UK and managed to stay on the charts for an entire 37 weeks. It only made the charts in the United States by 2 positions, peaking at 198.

The band’s biggest single hits over the years include “Go Your Own Way”, “The Chain”, and “Dreams”.

Fleetwood Mac | Go Your Own Way (vocal only, bass)