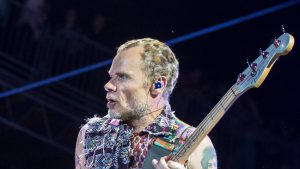 Flea, born Michael Peter Balzary in Melbourne, Australia in 1962, is a founding member and bassist of Red Hot Chili Peppers. His interest in music began when he was in his teen years, although he initially didn’t have an interest in rock music. He was more interested in jazz music until he met Hillel Slovak and Anthony Kiedis, which were who got him interested in rock and eventually co-founded Red Hot Chili Peppers with him in 1984.

Their first album as Red Hot Chili Peppers was released under EMI in 1984 and was the only album by the group to have Jack Sherman playing guitar.