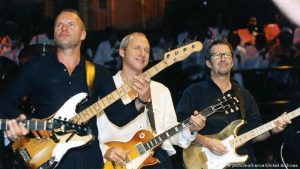 Formed in London in 1977, Dire Straights became one of the world’s best-selling rock bands. They’re basically a mix of several smaller genres that includes roots-rock and rock with a blues type of feel to it in a way that only Dire Straights could pull off.

Their music has always been uniquely Dire Straights, and I can think of no other band that is as original as they are across the rock spectrum. This is why their appeal to people across many genres made their sales skyrocket through their split careers.

The band has a split history of recording and touring history. From 77 to 88 and then again from 91 to 95. A total of 15 years and well over 100 million in album sales.

Money For Nothing (Mark Knopfler guitar only)

Sultans of Swing (Mark Knopfler vocal and guitar only)

Sultans of Swing (drums and guitar only)