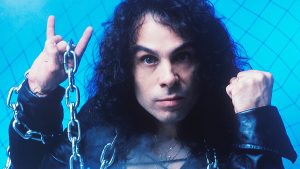 Ronald James Padavona, known as his stage name Dio or “Ronnie James Dio” began his musical career in 1957 in a band known as The Vegas Kings. He played bass guitar for the group and it went through two name changes, “Ronnie and the Rumblers” and “Ronnie and the Redcaps” before releasing their first single “Conquest”/”Lover”, with neither featuring Dio on lead vocals. Their second single was “An Angel is Missing”/What’d I Say”, which had Dio as the lead singer on both.

He joined Rainbow alongside the guitarist for Deep Purple, Ritchie Blackmore and released 3 studio albums with the group starting in 1975.

He also performed with Black Sabbath beginning in 1980 and recorded 7 albums with them.

Rainbow in the Dark (Ronnie James Dio vocal only)